The Storage system allows HyperCX administrators and users to set up Images, which can be operating systems or data, to be used in Virtual Machines easily. These Images can be used by several Virtual Machines simultaneously, and also shared with other users.

The following tyes of images are supported:

Image persistency controls how the data is managed inside the image, and how the VM behaves. This is an important concept that should be understood. When creating OS images and DATABLOCKS, or updating any of those types of images, persistency can be specified between two options:

Two options under Advanced options should be taken into consideration when creating an image:

So-called "full virtualization" is a nice feature because it allows you to run any operating system virtualized. However, it's slow because the hypervisor has to emulate actual physical devices such as SCSI/SATA or IDE drives. This emulation is both complicated and inefficient. On most cases, Virtio drivers are recommended. Virtio is a virtualization standard for network and disk device drivers where just the guest's device driver "knows" it is running in a virtual environment, and cooperates with the hypervisor. This enables guests to get high performance network and disk operations, and gives most of the performance benefits of paravirtualization. SCSI/SATA or IDE bus is only recommended for Operating Systems without Virtio drivers. All images provided on Virtalus marketplaces use Virtio as Bus.

This options allows to specify the image format. The two most common formats are:

When uploading new images, the mapping driver must be the same that was used when creating the image. If not, the VM or container will fail when being deployed.

Users can manage their images using the HyperCX web portal, selecting the Images tab. By default this tab is available in all the views except for the Simple view.

OS and CDROM types of Images can be created from an existing file, but for datablock Images you can specify a size and let HyperCX create an empty Image in the Datastore.

If you want to create an OS Image, you need to prepare a contextualized virtual machine, and extract its disk.

Once you have a disk you want to register, you can upload it directly using HyperCX: 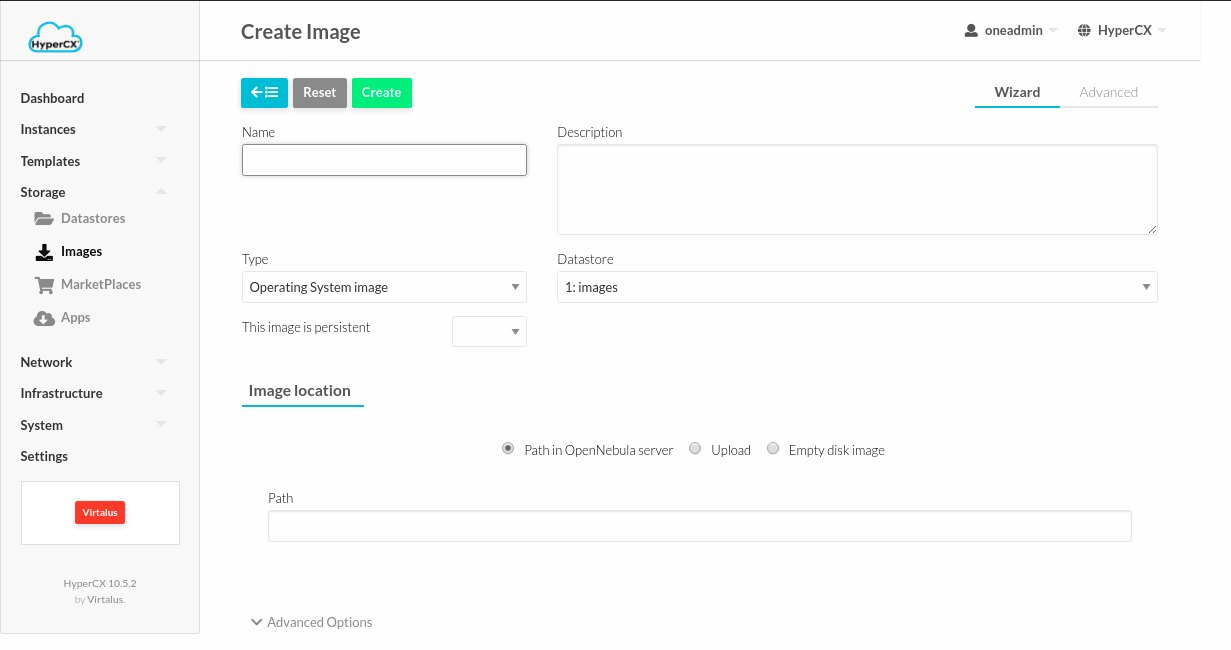 You need to choose the Datastore where to register the new Image.

Limitations when Uploading Images from HyperCX

Image file upload to the server via the client browser is possible. The process is as follow:

Note that when file sizes become big (normally over 1GB), and depending on your hardware, it may take long to complete the copying in step 3. Since the upload request needs to stay pending until copying is successful (so it can delete the temp file safely), there might be Ajax timeouts and/or lack of response from the server. This may cause errors, or trigger re-uploads (which re-initiate the loading progress bar).

Existing Images can be cloned to a new one. This is useful to make a backup of an Image before you modify it, or to get a private persistent copy of an Image shared by other user. Note that persistent Images with snapshots cannot be cloned. In order to do so, the user would need to flatten it first, see the snapshots section for more information.

The Images tab contains a dialog for the clone operation:

The users can share their Images with other users in their group, or with all the users in HyperCX. See the Users and Groups documentation for more information.