HyperCX allows users to create new VMs using prebuilt templates and they are defined in a way that multiple VMs can be deployed using the same template and context. Creating new VMs can be as easy as a click of a button everything is predefined by us and users just need to initialize the template. Having control over a running VM is quite important and this section defines some important aspects. 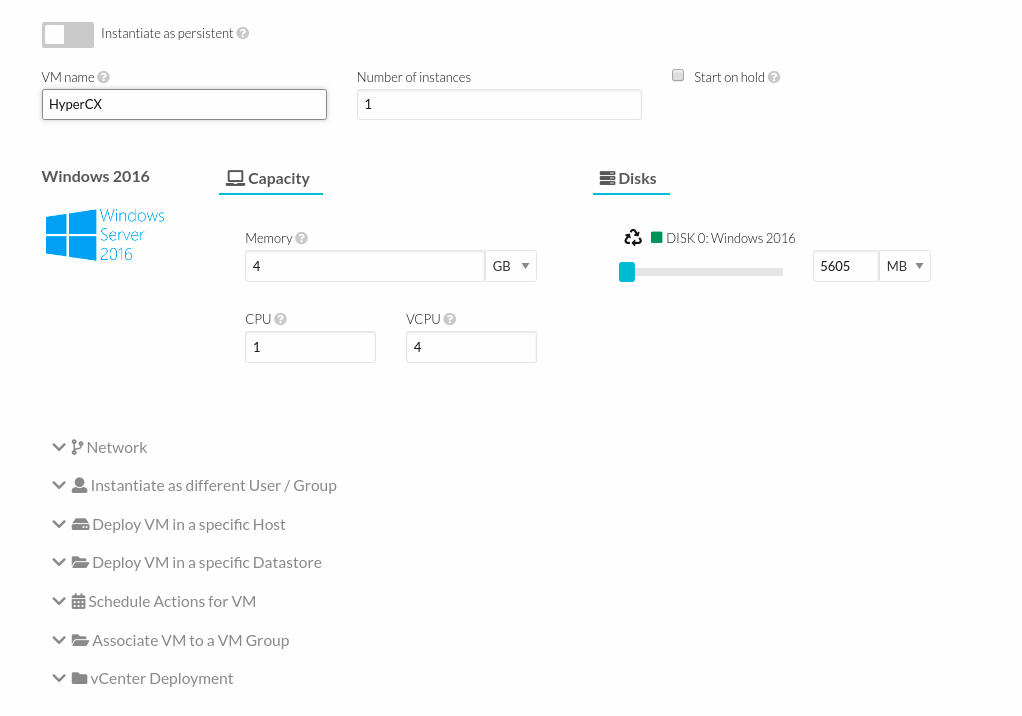 For templates downloaded from a market, the name of the VM will be used as hostname inside the VM. This behavior can be changed.

For appliances downloaded from the marketplace, it will be possible to set a root (or Administrator password in case of Windows) during instantiation. In the case of Linux VMs, it is not possible to access the VM via ssh using the root account and the specified password for security reasons. For immediate ssh access to the root account, a public key must be configured either for the user or the template. Root password can only be used from the VNC console.

No appliance obtained from a marketplace has a default username or password. It is possible to specify a password for the root user (or Administrator) during instantiation, but, except for Windows VMs, this is not recommended. Users are encouraged to use ssh public keys. Root password or ssh public keys can be modified after the VM was created by reconfiguring the VM.

HyperCX offers password-less authentication by default so all a User needs to do is provide their public SSH key(RSA SSH-2 preferably) on the HyperCX portal, then initialize the VM and once it’s initialized user can access the VM using their private key and user as root. SSH public keys can be defined either in the user configuration (this is the recommended approach) or directly in the VM template.

Instructions on how to generate SSH public keys on Windows can be found here.

Windows VMs can be accessed using RDP. By using this feature, HyperCX will provide a RDP session configuration file.

In order to enable this feature, RDP most be selected in the specific NIC it will be used when instantiating the VM. Note that RDP can be activated on a single NIC only. If this option is enabled in several NICs, the RDP configuration file will only contain the IP of the first NIC where it was enabled. 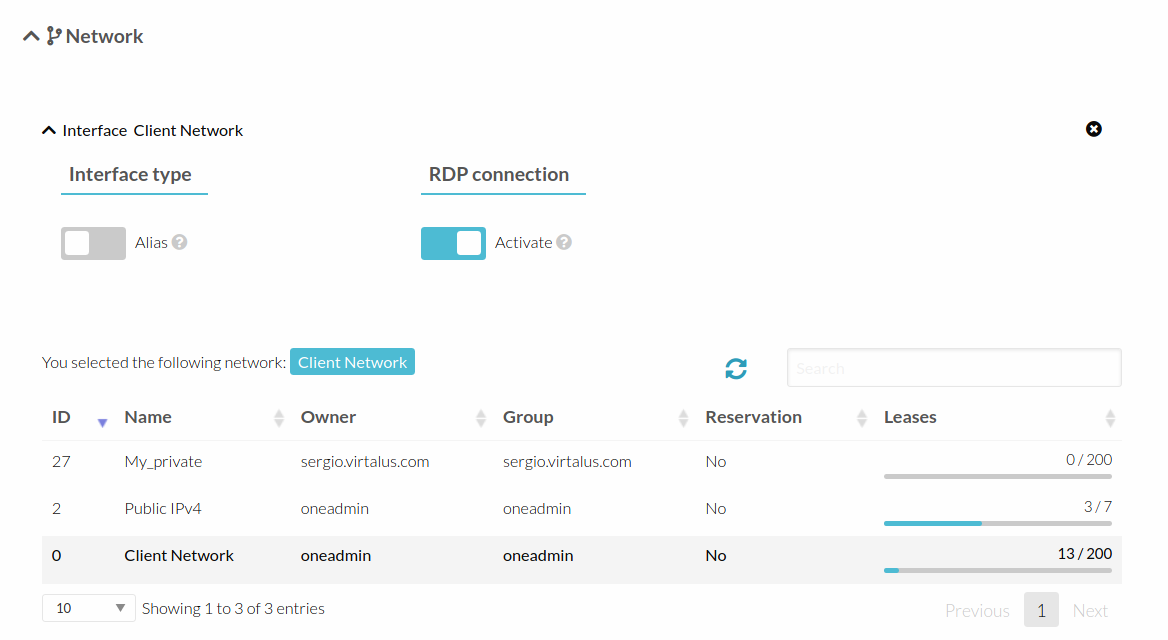 Once the VM is instantiated, users will be able to download the RDP configuration file. 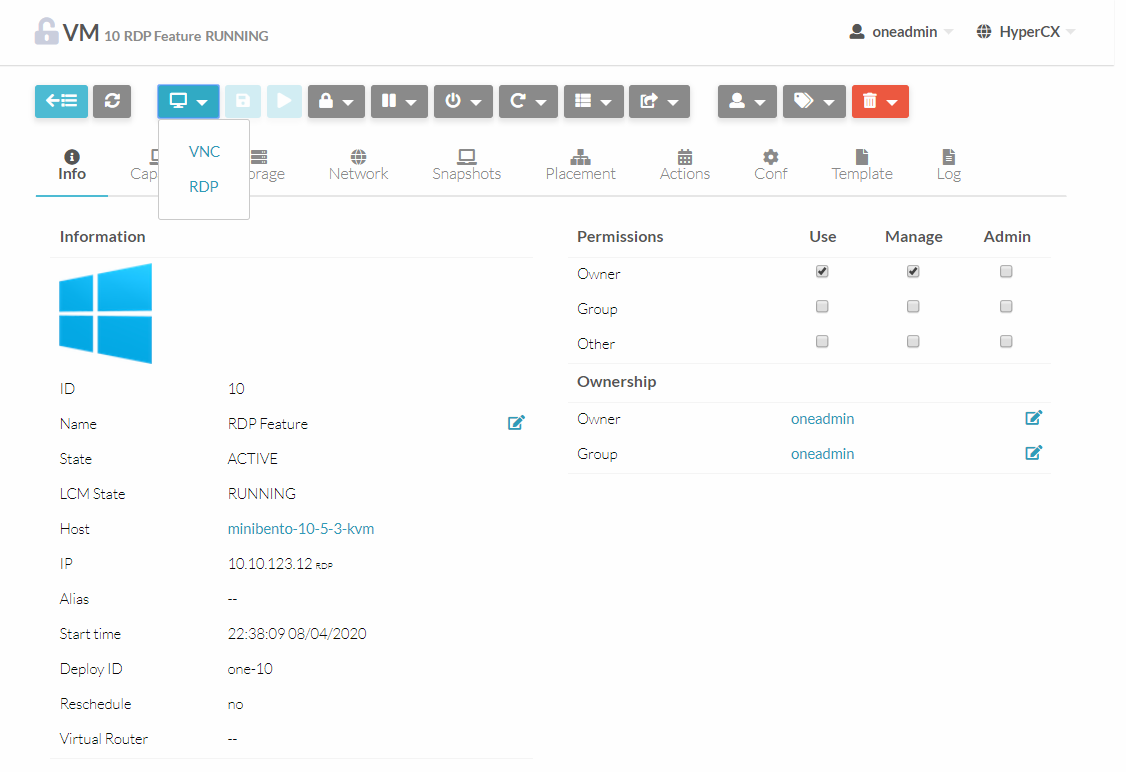 RDP establishes a connection directly to the VM's OS. This is different to the VNC connection, which goes directly through the hypervisor. This means that RDP connections will only work after the OS has started. When deploying a Windows VM for the first time, this processs will take a couple of minutes since the OS will be automatically configured on the first run. VNC connection can be used to check the process. Also, RDP port can not be blocked, either by a firewall inside the VM or HyperCX's Security Groups.

Default user will be Administrator and the password that was configured when creating the VM will also be reflected in the RDP session configuration file.

HyperCX implements a VNC client to connect out-of-band to the VM. Any VM can be accessed using VNC by clicking on

The VNC endpoint varies depending on the hypervisor:

VNC can be used when a root password was defined for the VM. In this case, root passwords can not be used via ssh for security reasons, but they will work on the VNC console.

Some settings inside the VM are configured directly by HyperCX through the contextualization process. This settings should not be configured directly inside the VM since they will be overwritten after a reboot or a recontext operation. Instead, they must be modified through HyperCX. This process can be done live, there is no need to shutdown the VM.

In order to reconfigure a VM, go to the Conf tab inside the VM and click Update COnfiguration:

Contextualization options are defined inside the Context tab: 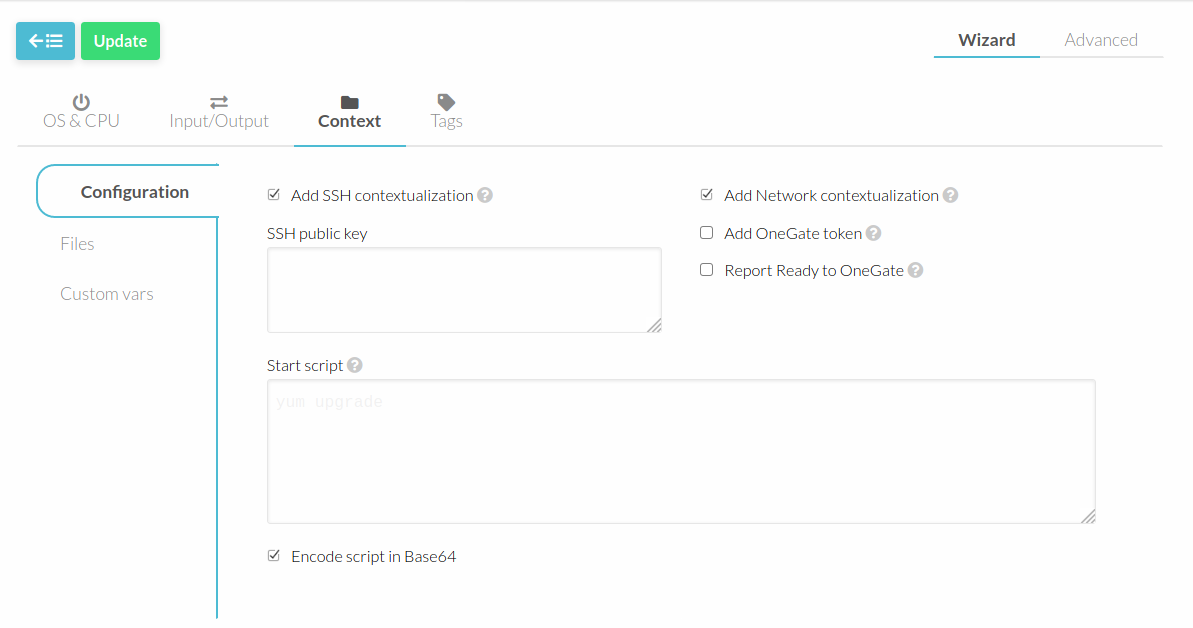 You may resize the capacity assigned to a Virtual Machine in terms of the virtual CPUs, memory and CPU allocated. VM resizing can be done in any of the following states: POWEROFF, UNDEPLOYED.

If you have created a Virtual Machine and you need more resources, the following procedure is recommended:

To adjust the size of a disk in the VM can be done live or with the VM turned off. Go to the VM menu and in the Storage section click on

A window like the one below will be displayed showing the original size of the VM, increase space and click on resize.

For Linux based VMs and containers nothing else needs to be done. New capacity will be reflected automatically inside the VM/container. For Windows Server after resizing the disk through portal, user will need to expand the partition manually inside the Windows VM by following below steps: 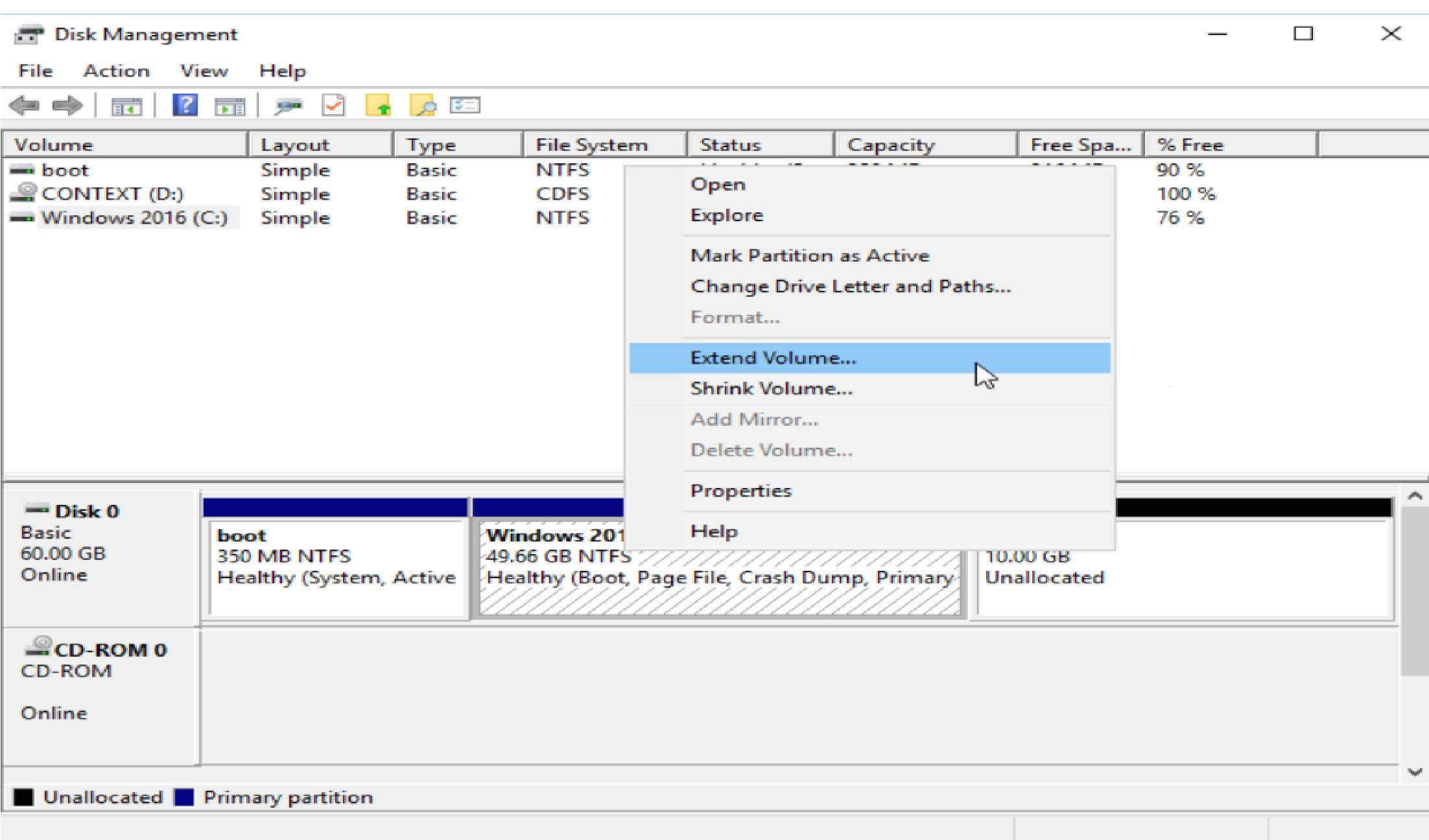 When the VM has a snapshot created on the disks, it is not possible to resize. To do this it is necessary to remove the snapshot.

Live disk resize is not supported for LXD containers

To attach a disk to a VM go to the VM menu, in Storage click on

. In the next menu select an existing image or a new empty disk (volatile disk) to be attached to the VM, this process can be done live. 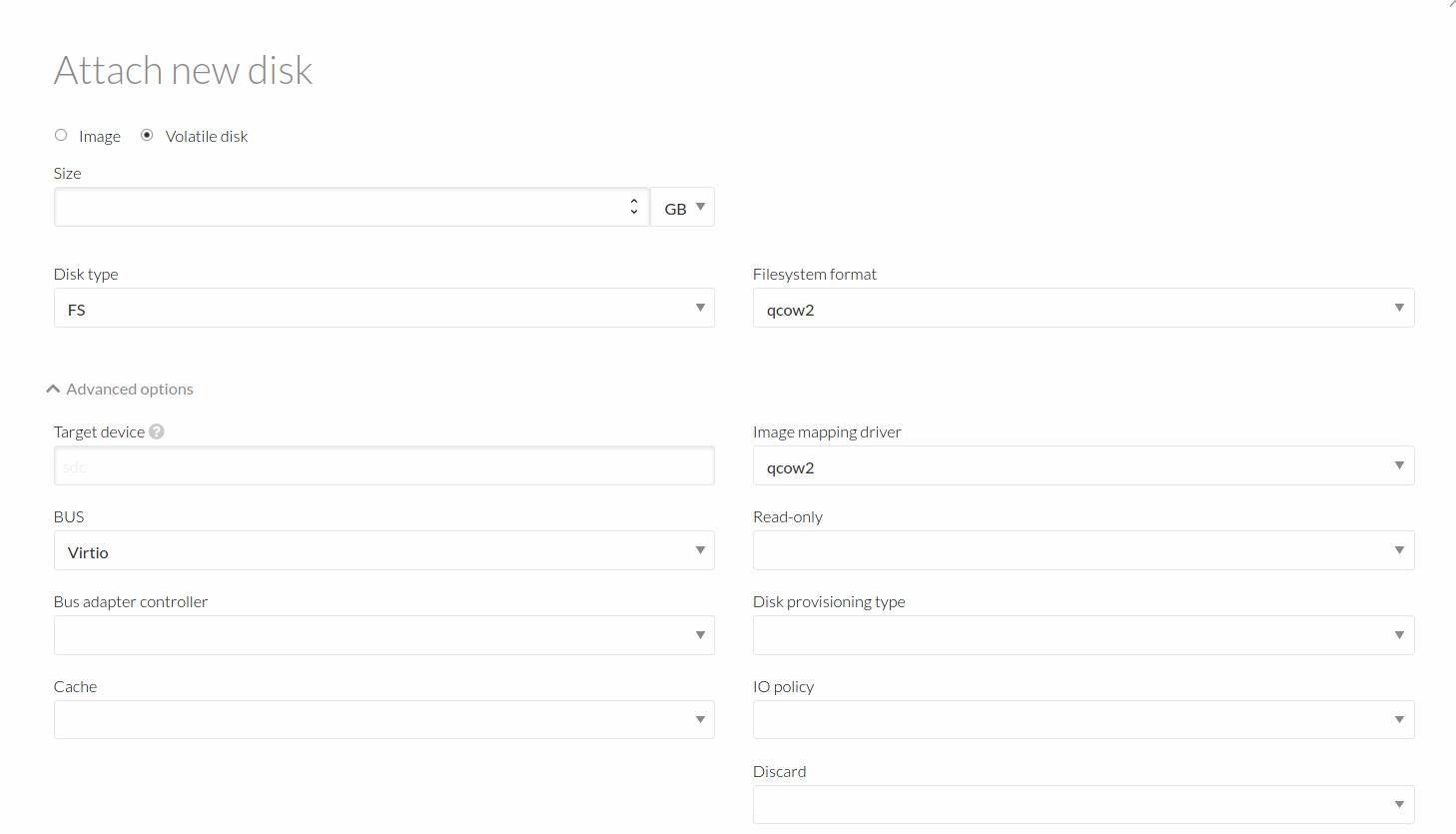 When you selecting a volatile disk (or a new datablock) on HyperCX, it contains no format. Because of this, attaching volatile disks or empty datablocks to containers is not supported at this moment.

To modify the CPU Topology of a VM go to the VM menu, in Conf click on

. In the next menu select Tags and add the following lines within Data box.

The VM must be powered off for the changes to take effect.

Lock and unlock is a function that can be applied in VMs, it works as follows:

oneadmin user is not affected by locks and can perform the operation in any case.

User can search or filter VMs. This is specially usefull on large environment with many VMs.

For example, for searching VM with a spesific IP address:

If the instance is running, there is a --hard option that has the following meaning:

There are two different ways to temporarily stop the execution of a VM: short and long term pauses. A short term pause keeps all the VM resources allocated to the hosts so its resume its operation in the same hosts quickly:

You can also plan a long term pause. The Host resources used by the VM are freed and the Host is cleaned. Any needed disk is saved in the system datastore. The following actions are useful if you want to preserve network and storage allocations (e.g. IPs, persistent disk images):

When the VM is successfully paused you can resume its execution with:

Use the following options to reboot a VM:

The deployment of a PENDING VM (e.g. after creating or resuming it) can be delayed with:

Then you can resume it with: - release: Releases a VM from hold state, setting it to pending. Note that you can automatically release a VM by scheduling the operation as explained below

New NICs can be hot-plugged directly and user can continue their work without even worrying about restarting the VM. To attach a new navigate to the desired VM select Network tab and click on

while for removing a network select the cross button to remove the desired NIC. Keep in mind that cases as Centos may change the default gateway. To know how to avoid this, go to Virtual Networks.

Although contextualization runs automatically with every change made to the VM, some VMs with specific OS, such as Windows, must be turned off and back on for the changes to take effect. In this context it means that if a new NIC is attached to a Windows VM while the VM is running, the network configuration of the new NIC will not be automatically set.

Virtual Machine's virtual disks can be saved as a new image. This new image can be used to create a new template or be attached to an existing VM.

To export the VM's virtual disk as an image go to Storage tab inside the VM's view and click the Save As icon. This action can be done live, or with the VM powered down. It will create a new image out of the saved virtual disk and can be located in Storage > Images.

New disks can be attached to running or powered off VMs. To attach a new virtual disk to the VM go to Storage tab inside the VM's view and click the Attach disk button.

LXD containers can not have volatile disks or empty datablocks attached.

Save a VM Instance

Any VM can be saved as a new template before it is destroyed. To do so, the user has to poweroff the VM first and then use the save operation.

This action clones the VM source Template, replacing the disks with snapshots of the current disks (see the disk-snapshot action). If the VM instance was resized, the current capacity is also used. NIC interfaces are also overwritten with the ones from the VM instance, to preserve any attach/detach action.

This feature is compatible with both KVM and LXD hypervisors.

During any modification/initialization or any other task a VM displays its status and to have complete information and control over User’s running VMs it is important to understand these states. Admin can view the status on Instances -> VMs. While a user can view state by heading over to the VMs tab on the portal and hovering over the status icon.

Following is a descriptive table that defines status of a VM.

You can create, delete and restore snapshots for running VMs. A snapshot will contain the current disks and memory state.

At the moment this feature is only available for KVM, it will soon be available for LXD. Please take into consideration the following limitations:

It is possible to migrate VMs from one node to another "live" within the same cluster, that is, without shutting down the VM.

There are 2 supported methods:

Containers do not currently support live migration. This feature is being implemented by a project called CRIU.

Allowing users to delay the actions until the given date and time. Here is an usage example:

These are the periodic actions that can be carried out:

Scheduled actions can be also relative to the Start Time of the VM. That is, it can be set on a VM Template, and apply to the number of seconds after the VM is instantiated.

This functionality is present graphically in HyperCX in the VM Template creation and update dialog, and in the VM Actions tab: 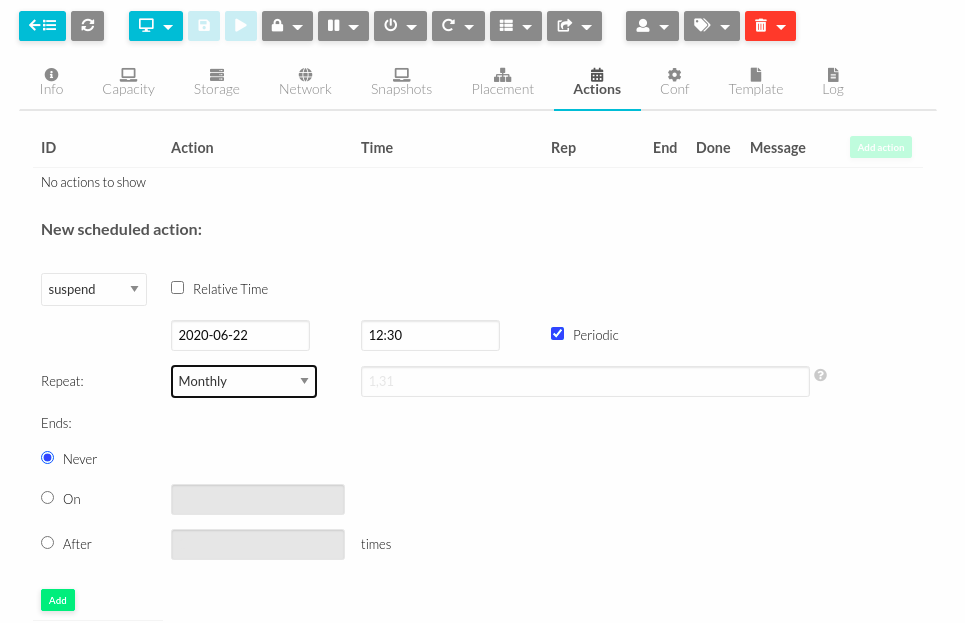 These are the commands that can be scheduled: